Last few days Soulbath Peace Foundation has been receiving a lot of inquiries and emails, requesting to throw some light on the matter regarding this email in circulation with the subject line -"Empty the throne" - His Holiness Sri Raj Bhowmik's message to His Holiness the Dalai Lama.

Below is an official release from an interview with our Founder.


Is it true that you sent this personal message to Dalai Lama before he made an official announcement?

(SPF TEAM NOTE: SPF officially confirms that this communication has taken place on Friday December 03, 2010. Dalai Lama made an announcement by March 2011. This was sent through, a hand written letter, a hand-delivered note, and also by an electronic mail transfer (email) from Founder's official email id)


If this is authentic, then isn't this a big news worthy of global coverage? Why did your office not decide to release it to media or make it available in the public domain? Was this sent out as a physical letter hard copy or an email?

SPF did not make this available to public as this was supposed to be a private exchange of my personal views directed respectfully to Dalai Lama.

(SPF TEAM NOTE: As for the authenticity part, anyone can verify the authentication of the communication from Dalai Lama's office. This was sent through all three means, -a hand written letter, a hand-delivered note, and also by an electronic mail transfer (email). The whole world knows that an electronic trail is easy to be verified by anyone at any given time. There is a fool-proof method for any email to be easily verified on the facts about the dates and timings).


Do you think your suggestion of emptying the throne has influenced the Dalai Lama to make this decision of quitting his royal seat?

While this is a fact, that I have written this letter directly to him, as my personal message and advise, but in no way this implies that my personal advise, insight or view was the reason for Dalai Lama to make his decision to quit his post. Dalai Lama might have had his own personal reasons to make this decision based on his own choice. The best individual to comment on his decision would be Dalai Lama, himself, so please direct all your queries on this matter to him. I will respect any decisions either taken by him or any other individual. I wish him well ahead.


Assuming, the Dalai Lama listened to your advise and took the step, so now will his childhood dream get fulfilled? Will Tibet ever be free?

Yes. It is bound to be fulfilled when all the steps are arranged to unfold as per the advise and the message in the letter. With this announcement he has only unfolded the first step as advised in my letter. For any journey to be completed, the first step is as important as the last step. History can register its pages in time, only when the first step till the last step is made to unfold. No-one creates history, history is already there; -one has to assist it by arranging to unfold all the steps. When the arrangement is made to unfold all the steps, any dream is bound to be achieved. The final step is already given to him and the people in the final closing line of my message in the letter. If this dream is his soul-song, and what his deepest heart wants to sing, then arranging to unfold all the steps will be the reason for all his people to celebrate and witness a rejoice in their land.


If this is really true then this is an international news because the world media is aware that till the day Dalai Lama announced his decision to quit, even his closest disciples and inner circle were shocked because no one had any idea of this sudden announcement. I am aware that a few famous gurus take appointments to come and meet you personally for your advise and predictions. So did HH Sri Raj Bhowmik leak a high level confidential discussion that Dalai Lama and his inner circle might have discussed? Or was this one of HH Sri Raj Bhowmik's predictions?

This message was sent to Dalai Lama long back, on 03rd December, 2010, and at that time even Dalai Lama himself would not have contemplated that such an incident would even be possible, -do the math.

After HH Sri Raj Bhowmik ends the interview, the interviewer requests the SPF Team for a verified copy of the original hand-written letter and the email copy which was sent to HH Dalai Lama. Before readers read the original letter, please read some additional information.

MARCH 14, 2011 (Announcement by HH Dalai Lama)
AFTER six decades as the living emblem of Tibetans in exile from Chinese-ruled Tibet, the Dalai Lama prepared on March 14th, 2011 to present his resignation from all “formal authority”. He announced plans for his departure from his throne just last week. Millions round the world are perplexed and caught off guard and have yet to regain their footing of why did he have to take this decision. Does he not care for his people anymore? Has he given up the will to regain the land for his people?

December 03, 2010 (The date on which this letter sent by HH Sri Raj Bhowmik to HH Dalai Lama)
HH Sri Raj Bhowmik had conveyed his personal view and suggestion to His Holiness Dalai Lama on Friday, December the 3rd, 2010. His message conveyed his prediction and advise to the Dalai Lama for a solution that will fulfill his life's biggest dream. In the communication further, according to his predictions, he strongly urges and recommends to the Dalai Lama, that if these conditions are fulfilled, this will be the reason for all his people to celebrate.


Below attached is the extract of the communication that had been sent from His Holiness Sri Raj Bhowmik's Desk to His Holiness the Dalai Lama's Desk in Tibet. The letter is dated Friday, December the 3rd, 2010. This letter is now officially being made public. Anyone and everyone who is interested to know the facts can easily verify the authentication of the communication below from Dalai Lama's office. Also as this was sent as an electronic mail transfer hence it can be verified for its legal authenticity.

​Date: Fri, Dec 3, 2010, His Holiness Sri Raj Bhowmik's letter to His Holiness the Dalai Lama. The letter is represented here in its original format.
​
Note to readers: These are parables. The contents might seem incomprehensible to some including us in the SPF Team, but this is how great souls throughout history have communicated, by using parables in which are hidden the deepest meanings to decipher from. History has shown us that not only does it needs a great soul of immense wisdom to convey and communicate in parables, but it also requires a great soul of immense wisdom to decipher the parable received. Until the two match up, the parable has no place in history. 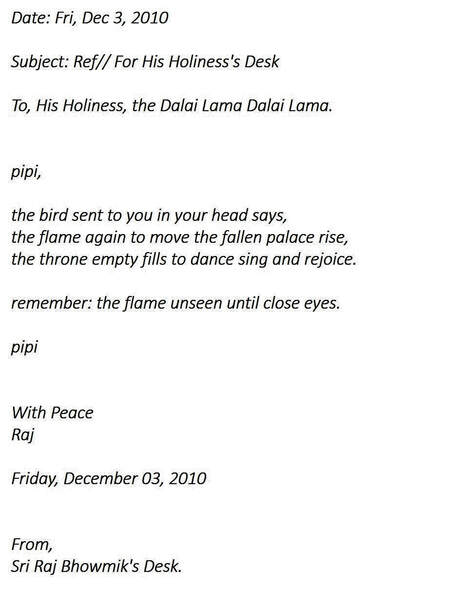 (END OF EMAIL ATTACHMENT. This letter has been sent through an electronic transfer from our Founder's official email id on the mentioned date, also by a hand delivery of a hand-written letter, and by a postal mail all on the same date. Any individual can write to the SPF Team to ask about any queries or collect more information on this subject)