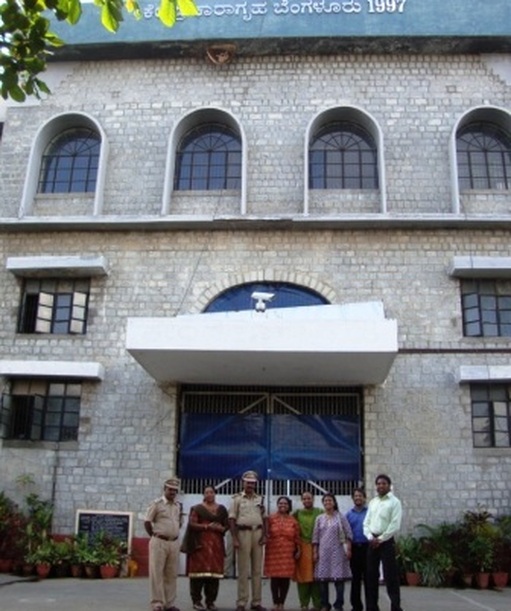 (In picture above: SPF TEAM and KARNATAKA GOVT. SENIOR OFFICIALS)
SPF mention a special thanks to all the government officials & Government of Karnataka who supported us to make this possible.
A New Birth-Moving Beyond – From Fear to Compassion

Pongal and Sankranti are festivals of harvest. It begins with clearing the clutter and reaping the harvest. This symbolic interaction to the Bangalore Central Prison on this auspicious day began our work of sowing the seeds of hope and an inner passion to be useful in life.

Bangalore Central Prison – Even in the wildest thoughts, one can only have a single image – Locked, trapped, fearful, cheat or criminals. As part of the ‘RAJ BHOWMIK – Back To Society DREAM’, the Soulbath Peace Foundation Volunteers reached the prison only to discover that life was different inside. It is a community that needs assistance because inside each of the 160 inmates we met today – were mothers who have not met their children for about 5 years, were wives who have been rejected by their husbands, were young children who were being brought up seeing their mothers in white sarees as uniform and of a new born – coming into the world inside the prison. 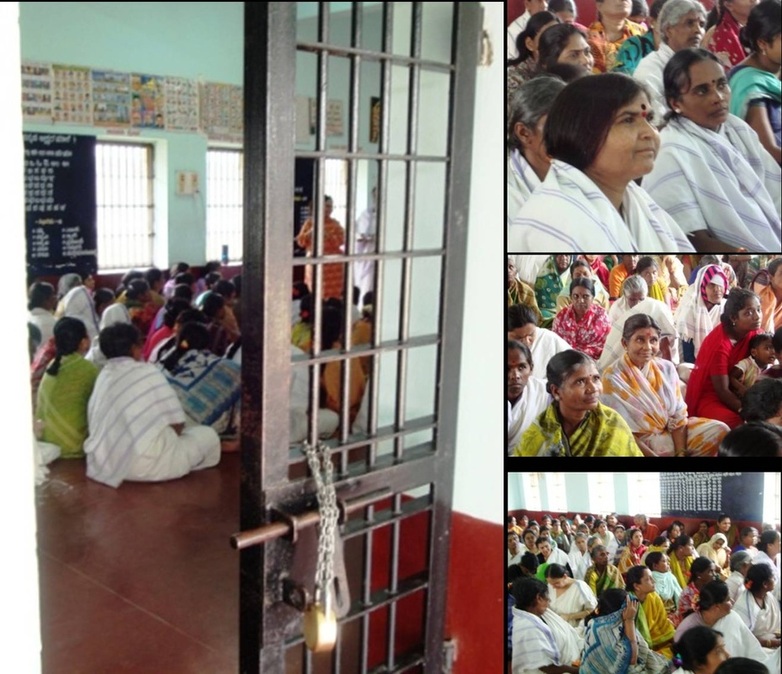 Here are women who could not find a lawyer - majority of them have no idea about why they are in the prison. The story brings tears to anyone – when our interactions only taught us that some women have their entire family in the prison because no body could defend them.

As we walked in being stamped at the gates, we realized that our stamps were washable. But our inmate friends complained that their stamps were permanent – of being a prisoner in Bangalore Central Prison. Understanding and surveying the place in advance as SPF volunteers walked in to the “school – our venue” , we were welcomed with 160 hostile angry looks, sarcastic smiles, some hidden, some unwilling & some very stern. This has been their home and the part of themselves that has walked into their home has been their worst shameful part that they probably want to bury.

Their day comprises of working for about 2 – 3 hours and the rest of the day is just spent chit chatting, going to the school & sleeping. To get through them was a challenge, but we have learnt from Raj Bhowmik that love and compassion will always help to pave the path to anything in the world.

Our interactions with the inmates focused on establishing a platform where they realized that they were only in Bangalore Central prison but who could escape the mind – life prison. We understood and sailed through the process of identifying that if we are trapped in our minds with a thought, it is like an old tape that merely repeats itself.

But is this a new concept? Whatever we feed the mind grows and gives fruits. But the situation here was feeding more pain, more shame and more anger. At the slightest given opportunity they were ready to leave everything to be back with their families. But some were deserted and alone, and some would not be accepted. “How can I get my daughter married?”, said a mother, “My whole Taluk knows about this. I am ashamed and feeling guilty.”

Question: So what can break this?
Answer: We followed what Sri Raj Bhowmik says in his book, CORPORitual, -"Meet yourself in Silence." 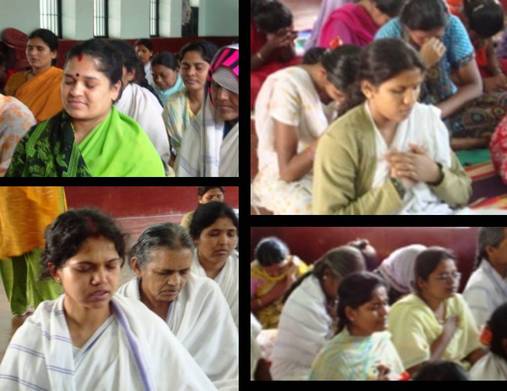 The powerful CORPORitual Values of Living – predominantly “Meeting yourself in Silence” and “Forgive and Bury the Past” gave them a new ray of hope – a hope to accept what “IS”, to move in the ‘NOW’ – so that we give the world a better part of our self.

The forgiveness saw only tears and love. At the end what remained were heart beats that were more compassionate to themselves & ready to see the world through new glasses.

We heard from our friends inside the prison their stories of change and transformation. Vasanti has been in the prison shared her experiences being in the prison now for about 10 years – positive, an aura of transformation for other inmates said “Amma- Give us work. We want to work. We are ready to get trained in anything”.

Some have left their homes as far as Kolkata and Orissa and are here in the prison today. They are worried about their loved ones and wanted us to carry back messages to ministers, their brothers and society at large. The stories are never ending but we carried a simple and powerful message.

It was a message that the new era has already begun. It could only be created when this new consciousness is made aware within inside each one of us as our founder, Sri Raj Bhowmik says and I quote:

“My whole effort is to bring a new consciousness to people's lives. A consciousness with which they will decide to put a new found awareness in every step that they take in whatever they do in life. These steps multiplied will lead the way towards the beginning of a new era filled with love, joy and peace for oneself and for the global society."

These are new times and surely the chanting has to be according to our times. So what and how we repeat to ourselves is what we create around us as manifestation. So through our interaction this message went inside strongly anchored within each one of them that awareness is the only key – and it is something that we can choose at every minute.

The prison authorities were extremely encouraging for a project with the inmates. A sustainable way of living life that would keep them engaged and make them feel valued for their times spent in another University of life – The Prison. As we walked out of the places – my memories went back to the way this prison journey began and we realized that there was so much more to be done. It reminded me of a few lines Sri Raj Bhowmik had quoted in one of his discourses.

"Don’t worry and fret fainthearted,
The chances have just begun.
For the best jobs haven’t been started,
And the best work hasn’t been done." 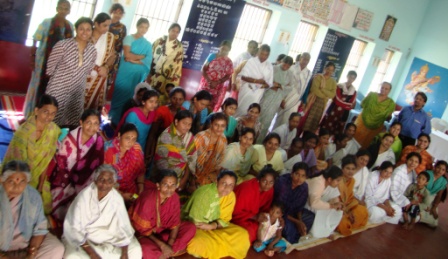 Surely our best work is unfolding. And getting here to this platform we would like to thank all the government officials and Government of Karnataka whom we interacted along our journey to make this beautiful beginning. Our gift to mankind would be that with this new found hope and from a completely changed perspective, our friends from the prison could make life worthwhile- living a life of dignity with peace, respect and love that is every individual’s birthright.

If we know it belongs to us, we accept it, but, if we think it is denied, we fight to get it back. Most of the stories today taught us to move beyond this feeling of “I am denied.” and having to fight in life. But in reality it only teaches us to the lesson of moving on and letting go for the best work that unfolds itself. 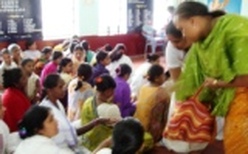 Soulbath Peace Foundation also offered snacks during this interaction that were sponsored by two families- Mr. and Mrs. Hareendran, and Mr. And Mrs. Ashim Sarawgi.


This is one of the very good experiences as a SAHHEAL Healing Consultant. We started off with almost 160 prison inmates. I could sense a deep restlessness inside their minds. They were made to assemble in a room and were very restless. I could sense some kind of masking on their faces as they were laughing to just mask their anger. They had a deep feeling of rejection. As we moved on in the workshop, a few of them left and the ones who remained after the experience had a catharsis that was wonderful. Many brought their feelings out, they could find peace deep down in themselves. The realization in the entire process is that all of us are children deep down with different feelings of rejection, pain, hurt and helplessness. A right source and a helping thought is all needed to make the difference.

I am very thankful to Soulbath Peace Foundation for this platform providing us this experience through which I had this chance of learning. As said by Sri Raj Bhowmik, in his book CORPORitual Values of Living, -that just by being compassionate to oneself, we can make a change in the world. I could sense it in this work as they really make world a different place.


I never thought that I could ever come like this to the prison. But somehow I was deeply inspired to come here. When I met the women inside and met them eye to eye, I began to understand the depth of the inside story – the real world of the women whom the world outside called criminals – the ones who create an unpleasant feeling in the society. I am a little disturbed and a bit withdrawn seeing their pain, anger and sadness being a woman myself. I feel it is very necessary to bring the change in their lives who are ready for that. Yes they need to bury the past and bring themselves in the now to spread their love to their families as well as the rest of the world.


The experience that I got from the visit was that I had my own things of the jail that only those who have committed the crime would be there, but after I had interactions with them, did I know that people who haven’t done anything were also there in the jail. Committing a crime or blunder is not a great deal, just that one second, it changes your whole life. There is a tag put on you which the whole society sees. You are known to everyone- among your friends and relatives. The way they look at you is totally different. You are not respected, not wanted by your near & dear ones, even though you wouldn’t have done anything wrong. It is always better to think within or to talk within before being out of control for that one second. It is not only the matter of the person’s character who has committed any crime, it is his whole family. People or the society looks upon them in a very different way. They don’t know the background as to why did the person commit that crime, they just are ready to pass on comments and other things. It was a heart touching session that happened when I saw few inmates crying for what they have not done. For a second I started cursing God, but I know even He can’t do anything. It was just that moment of anger that had led them here. They just have to accept for what they have done and let go all the things and have peace and that should be from within. The only way that they can come out would be to listen to oneself. They should talk to their inner self on a regular basis so that they know who they are and their capabilities.


A new experience in a world very different. We see parts of this world in the newspapers & TV. But being here among prisoners and seeing their life closely is not something that most people can. We spent time with the women prisoners. Anger, shame, why me, nobody cares for me are the emotions they live with. This is the language they speak. These are the thoughts that they constantly live with. Rejection and the fear of the future is a big worry. Life for them is about the past and the concern for the future. There is just no silence. They do not accept their situation. The day was about caring to love ourselves, accepting the situation & finding the calmness within. The entire set of 60 people could connect & began their journey of change today.
It was a celebration and a new birth today. Happy Birthday to all of them!!